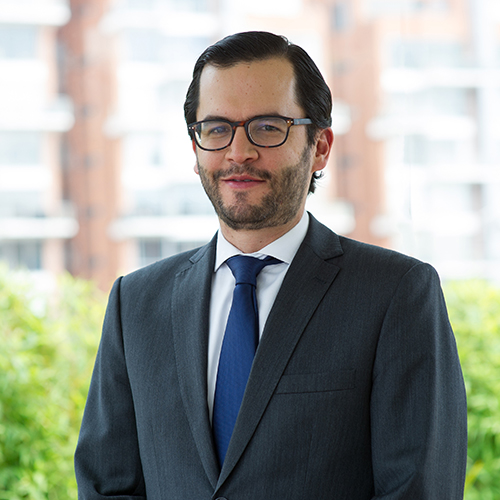 Attorney with wide expertise in commercial law, international business law, mergers and acquisitions, and customs and international trade. Mr. Mafla is also an arbitrator at the Center for Conciliation and Arbitration of the Chamber of Commerce of Bogotá, and currently is the Chairman of the Investment Committee of the Colombian American Chamber of Commerce (AMCHAM Colombia). He is also member of the Academic Committee of Customs and Foreign Trade of the Colombian Institute of Tax Law.

He was recognized as star associate by Chambers and Partners Latin America in 2013, 2014 and 2015. He was also recognized as a leading lawyer by Legal 500 in 2012 and 2013 and by Who’s Who Legal. After his appointment as partner in 2015, Chambers and Partners recognized him as an “Up and Coming" lawyer for Colombia in connection with International Trade/WTO.Mr. Mafla obtained the scholarship Lucia Patino at Universidad de los Andes in 1999.

Worked from September 2008 to April 2009 as exchange lawyer with the Spanish legal firm UrÃ­a MenÃ©ndez. In 2005 and 2006 was employed by Harkins Cunningham LLP as foreign lawyer, and was an associate at Cavelier Abogados from 2001 to 2004. Also published an article entitled "Disintegration of Commercial Integration - Trade System" - Cavelier Abogados article, 2003. Currently is a member of the American Bar Association (ABA) and the New York State Bar Association.

I would like to bring your attention to some key legal developments that occurred in Colombia in Customs and Foreign Trade over the last year.

These legal developments are related to 4 major industry topics:

- FTA's and other Trade Agreements

Please allow me to refer you to the analysis below on the development of Latin America through Foreign Trade & Investment:

José Francisco Mafla and Camilo Castrill at Brigard & Urrutia Abogados explore the development of trade throughout Latin America, and its effect on ...

A few days ago in Washington DC we had the first cocktail of our Trade and Investment Practice Group. It was an excellent opportunity for networking and strengthening relations among delegates of several WSG firms.

The participants to the event were able to meet and network ...

Over the last years, most WTO Members have categorized China as a Non-Market Economy (“NME”) during antidumping investigations (“AD investigations”). For this reason, China and Chinese companies have been subject to methodologies that deviate from the strict comparison with domestic prices ...

I am very glad of making the first entry of the group’s blog, in which I sincerely welcome you again to WSG’s new International Trade and Investment Practice Group (Latam). This ...

Colombia updated its free trade zones regime to increase the competitivity of this investment opportunity. Among others, it now allows three new activities for free trade zones, introduces the creation of a concertation committee to discuss key topics between the Government and the private sector, and it simplified procedures to declare a free trade zone. Decree 278 of 2021 was introduced as a tool towards innovation in the free trade zone regime...

Last year the Colombian Congress issued Law 1841, which incorporated the Free Trade Agreement (“FTA”) between Colombia and Israel into the Colombian legal system. Currently, the law approving the Treaty is under review by the Colombian Constitutional Court for its definitive entry into force...

Latin America’s current economic growth levels are among the world’s highest, and the region is preparing its regulations to meet new economic challenges. As such, the fostering of foreign trade and foreign direct investment (FDI) is important to increase GDP growth, create job opportunities, and improve logistics and production...