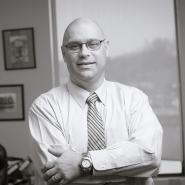 From the companies he represents in contractual, employment, real estate, shareholder, and business disputes to the major national brands that look to him for his in-depth understanding and knowledge in promotions, cause-related marketing, and commercial co-ventures, all praise Rob for his outgoing personality and his pragmatic advice. His clients know they can depend on him to accomplish whatever needs to be done in a timely manner.

For more than 25 years in state and federal courts nationwide, Rob has litigated cases before juries in a wide range of commercial actions including contracts, employment issues, intellectual property, commercial lending, and other corporate disputes. He has also arbitrated claims in Connecticut and New York, and before the International Chamber of Commerce.

Rob represents litigation clients in a wide range of industries, including aircraft, paper, food, energy, entertainment, construction, fashion, real estate, and investment funds. A sampling of results in some of his recent cases includes:

To learn more about third-party ratings and rankings, and the selection processes used for inclusion, click here.

You’re offered a $1 million game piece for $40,000 dollars. What do you do? As you might expect, this may be an offer you can’t refuse. A recent and very comprehensive article in the Daily Beast, provides an in-depth look at how the history of McDonald’s Monopoly Game has involved McStings, mobsters and molls...