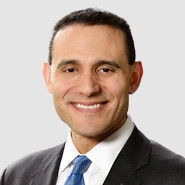 Alejandro Cruz is a Partner in the Firm’s Litigation department. Mr. Cruz represents clients in complex commercial litigation in trial and appellate courts, as well as in arbitrations and mediations. His practice includes matters involving structured finance transactions, financial derivatives, professional malpractice, antitrust actions, commodities manipulation, and art law. He also conducts internal investigations and represents clients in investigations by government agencies, including the Commodity Futures Trading Commission, the Department of Justice, the Securities Exchange Commission, and the New York Attorney General. In addition, as a member of the Firm’s Privacy and Data Security group, Mr. Cruz advises clients on a wide array of cybersecurity issues, including breach response, ransomware, regulatory compliance, risk mitigation, and the New York Department of Financial Services’ cybersecurity regulation. Mr. Cruz was named a 2020 “Rising Star” by the New York Law Journal, a designation that “recognizes the region’s most promising lawyers ages 40 and under.”

Prior to joining the Firm, Mr. Cruz was an associate at a New York law firm and served as a law clerk to the Hon. Eric N. Vitaliano of the United States District Court for the Eastern District of New York from 2011 to 2012.

Represented financial guarantors in complex contract and fraud actions against sponsors and underwriters of mortgage-backed securities.

Represented a European bank in connection with an industry-wide investigation into alleged manipulation of ISDAFIX, a benchmark rate for interest-rate swaps and options.

Represented a European bank in connection with a consolidated class action alleging violations of the Sherman Act and the Commodity Exchange Act based on alleged collusion and manipulation of ISDAFIX.

Represented a national law firm and one of its partners against malpractice claims by the executor of an estate arising from the theft and conversation of the estate’s assets.

Secured summary judgment for a chocolate maker in an antitrust price fixing case, and successfully defended that judgment on appeal.

Represented an individual in an investigation by the SEC regarding auditor independence under the federal securities laws.

Represented a non-for-profit arts organization in an investigation by the New York Attorney General.

Represented a Muslim organization subject to religious discrimination when it was denied a land use permit to establish a house of worship in New Jersey.

Represented a prisoner in a civil rights and medical malpractice action against a private prison medical provider for denial of medical care.

Represented putative class of children with disabilities in civil rights litigation seeking relief under the Individuals with Disabilities Education Act.

Represented individual in Bronx County Family Court in proceeding for an order of protection arising from domestic violence.

Represent individuals in housing court and administrative housing proceedings in Westchester County in partnership with Legal Services of the Hudson Valley.

Antitrust Update Blog is a source of insights, information and analysis on criminal and civil antitrust and competition-related issues. Patterson Belknap’s antitrust lawyers represent clients in antitrust litigation and counseling matters, including those related to pricing, marketing,...

DataSecurityLaw.com is the firm’s resource for the latest news, analysis, and thought leadership in the critical area of privacy and cybersecurity law. Patterson Belknap’s Privacy and Data Security practice provides public and private enterprises, their leadership teams and boards with...

NYPatentDecisionsBlog.com is a source for the latest patent decisions from the U.S. District Courts for the Southern and Eastern Districts of New York. The blog is authored by Patterson Belknap’s Patent Litigation practice group, whose members are highly experienced trial attorneys with extensive...