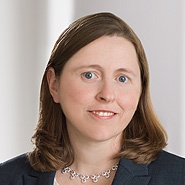 Catherine Williams is a Partner in the Firm’s Litigation department, where she represents clients in complex commercial and employment litigation and investigations. Her clients range from not-for-profit organizations, colleges and universities, publishers, and professional associations to medical device manufacturers, financial institutions and consumer products companies.

Ms. Williams has substantial experience defending clients in class action litigations. In her employment practice, she has represented clients in wage and hour class actions asserting a variety of claims under state and federal law. She also defended a putative ERISA class action alleging failure to pay benefits due to nationwide class of employees under severance pay plan. Ms. Williams also defends commercial class actions. In one recent matter, she defended an educational publishing company in a putative class action filed by authors concerning payments of royalties. She has also represented consumer products companies in false advertising class actions brought by competitors and consumers.

When clients are faced with litigation relating to employment, Ms. Williams has been successful in defending employers against claims for breach of employment agreements as well as discrimination and retaliation charges under city, state and federal law, including those relating to whistleblower and FCPA claims. She has also represented universities in litigation regarding wrongful termination claims by faculty members and the use of restricted endowment funds for faculty, and advises universities with respect to Title IX compliance and investigations.

As a commercial litigator, Ms. Williams has represented monoline insurers asserting contract and fraud claims relating to mortgage-backed securities transactions. On behalf of a medical device manufacturer, she obtained preliminary injunction in a false advertising and trademark infringement action, which was affirmed by the Ninth Circuit.

Ms. Williams shares in the Firm’s commitment to pro bono service, and is currently representing a class of children in foster care with developmental disabilities in a suit alleging that government agencies have failed to provide required services and have left the children in unduly restrictive placements. The class certification decision was affirmed by the New York Court of Appeals, and litigation is ongoing. City of New York v. Maul, 14 N.Y.3d 499 (2010). She also serves as a Board Member for New York Lawyers for the Public Interest.

Ms. Williams served as a Law Clerk to the Hon. Paul G. Gardephe of the United States District Court for the Southern District of New York.

MEMBERSHIPS: Board Member, New York Lawyers for the Public Interest

Antitrust Update Blog is a source of insights, information and analysis on criminal and civil antitrust and competition-related issues. Patterson Belknapâ€™s antitrust lawyers represent clients in antitrust litigation and counseling matters, including those related to pricing, marketing,...

Biologics Blog is a source of insights, information and analysis related to biologics, including the legal developments, trends and changing regulation that impact the biotechnology industry. Patterson Belknap represents biotechnology, pharmaceutical and healthcare companies in a broad range of...

DataSecurityLaw.com is the firmâ€™s resource for the latest news, analysis, and thought leadership in the critical area of privacy and cybersecurity law. Patterson Belknapâ€™s Privacy and Data Security practice provides public and private enterprises, their leadership teams and boards with...

ExemptOrgResource.com is an online resource for information and insight on the unique legal issues impacting nonprofit organizations. The site is designed to keep the nonprofit, tax-exempt organization community up-to-date on legal developments, changing regulations and good practices.

NYPatentDecisionsBlog.com is a source for the latest patent decisions from the U.S. District Courts for the Southern and Eastern Districts of New York. The blog is authored by Patterson Belknapâ€™s Patent Litigation practice group, whose members are highly experienced trial attorneys with extensive...


Last week, the Equal Employment Opportunity Commission (“EEOC”) updated its COVID-19 guidance to address workplace issues related to COVID-19 vaccines, including mandatory vaccination policies. According to the EEOC, employers may mandate vaccines, but must attempt to accommodate employees who refuse vaccination because of disability or a sincerely held religious belief, practice, or observance...

EEOC Issues Guidance on the Permissibility of Mandatory COVID-19 Testing in the Workplace
Patterson Belknap Webb & Tyler LLP, May 2020

On April 23, 2020, the U.S. Equal Employment Opportunity Commission (“EEOC”) issued new guidance clarifying that employers may conduct mandatory testing of employees for COVID-19 before they enter the workplace so long as the testing is “job related and consistent with business necessity...

The recent outbreak of 2019-nCOV, a flu-like respiratory illness better known as the Coronavirus, is causing employers to ready themselves for a variety of responses to the spread of the virus.  Human Resources professionals are seeking guidance on how to promote a safe and healthy working environment without violating the rights of ill or potentially ill employees.  We have some tips to help strike the right balance...