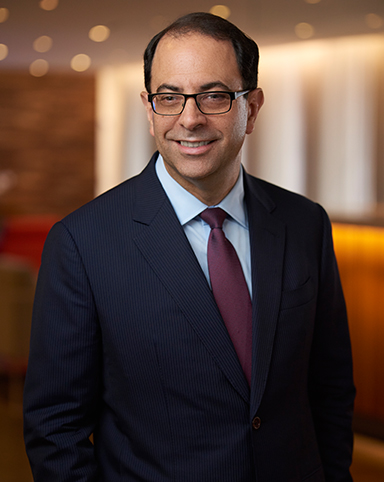 Gary is Chairman and Managing Partner of Lowenstein Sandler. The firm has experienced substantial growth under his direction, and now comprises over 350 lawyers in offices in New York, Palo Alto, New Jersey, Utah, and Washington, D.C. Gary believes that what makes Lowenstein Sandler different is the intensity of the firm's devotion to its people, its clients, and its communities. Under his leadership, the firm's lawyers regularly invest their skills and passion to support their colleagues, advance their clients' businesses, and strengthen their communities.

Gary's legal practice spans the areas of structured finance, mortgage finance, and commercial real estate, overseeing acquisitions, dispositions, and financings of properties; mortgage loans; and servicing rights valued in the billions of dollars. Esteemed by clients for his in-depth understanding of their industries and business processes, he inspires the firm's lawyers to immerse themselves in their clients' businesses in order to deliver efficient, relevant solutions.

Gary is also passionate about public interest and pro bono work. His vision inspired the creation of the Lowenstein Center for the Public Interest to strategically channel the firm's pro bono and public interest efforts. He serves on the Board of Directors of the New Jersey Institute for Social Justice; the Board of Trustees of the Victoria Foundation, which funds programs to break the cycle of poverty, reform education, and revitalize families and neighborhoods; and the Board of Directors of Kids In Need of Defense (KIND), providing pro bono representation to unaccompanied immigrant and refugee children in their deportation proceedings. He also serves on the Executive Committee of the Jewish Federation of Greater Metrowest and the Council of Trustees of the New Jersey Performing Arts Center. He is former President of the Board of Golda Och Academy, a Solomon Schechter school.

We are mobilizing an army of lawyers to help families that were unlawfully separated or detained by the Trump administration.

In his June 20 order, Mr. Trump pinned the current crisis on bad law, specifically citing “Congress’s failure to act and court orders.” On Sunday, the President went even further, suggesting that the United States suspend due process for undocumented immigrants altogether: “When somebody comes in, we must immediately, with no judges or court cases, bring them back from where they came.”

The problem, of course, is neither United States law nor the Constitution. It is the administration’s belief that both can be ignored to achieve a political end. As long as this administration pursues a deterrence policy predicated on inflicting harm on children and families and disregarding settled constitutional principles, the crisis will continue.

The president’s executive order is silent on how to help the more than 2,000 children, including infants and toddlers, who have already been separated from their parents and are now in federal custody. Held in an estimated 100 shelters around the country, these children remain in limbo, with no plan for reunification. The longer they are separated from their parents, the more severe and indelible the psychological toll. The continuing separation violates the constitutional guarantee of family integrity, which prevents the government from taking children from their parents without due process.

The executive order’s proposed alternative of prolonged family detention fares no better as a legal matter. Flores v. Reno, a 1997 case challenging conditions for children in immigration custody, expressly prevents immigration officials from detaining children for longer than 20 days. In another case, R. I. L-R v. Johnson, the Federal District Court for the District of Columbia in 2015 ordered the government to stop basing its detention policies for parents and children on its goal of deterring immigration.

Equally troubling, the administration’s avowed policy of prosecuting every person who illegally crosses the border, no matter their circumstance, contravenes our international treaty obligations. Many of these families are escaping unimaginable persecution in their home countries.

The 1951 Convention on the Status of Refugees, which the United States helped draft and subsequently ratified in the aftermath of World War II, prohibits parties to the treaty from imposing “penalties, on account of their illegal entry or presence, on refugees who, coming directly from a territory where their life or freedom was threatened” or who “enter or are present in their territory without authorization, provided they present themselves without delay to the authorities and show good cause for their illegal entry or presence.”

Article VI of the Constitution declares our treaties “the supreme Law of the Land.” Prosecuting individuals fleeing life-threatening persecution and seeking asylum at our borders violates our most basic constitutional principles.

Moreover, the administration’s policy of detaining families, like the child separation policy that preceded it, applies not only to those who cross between points of entry but also to those who obey our laws to the letter and present themselves at a point of entry to claim asylum.

We speak for a group of lawyers who lead 34 major American law firms. As a group, we cannot stand by as our government, under the pretext of enforcing the law, violates it and traumatizes children and their parents in the process. We are professionally obligated to safeguard the rule of law and to protect the poor and the vulnerable against targeted governmental abuses. We call upon the administration to develop an immediate plan for reunifying children with their families, to release families who pose no threat to our country and to terminate the policy of criminally prosecuting asylum seekers.

While it is the government’s responsibility, ultimately, to solve problems of its own making, we have coalesced our resources and joined forces with the legal services community to protect the rule of law. Our firms, which collectively employ about 30,000 lawyers in nearly every state, have pledged to help reunify families and ensure representation for legitimate asylum seekers. This outpouring of volunteerism depends on strong partnerships with the legal services entities on the front lines. The firm Paul, Weiss, working with the Refugee and Immigrant Center for Education and Legal Services, has sent a team of lawyers to represent parents detained near the border in Texas. The Lowenstein Sandler firm has been working alongside the Vera Institute of Justice and the Young Center for Immigrant Children’s Rights to secure access to counsel for the young, separated children held in New York State and to advise lawyers of their ethical obligations when they undertake such representation.

This crisis requires an army of lawyers to untangle because the immigration courts are flooded and detention centers across the country are bursting. The world is watching, and the private bar is mobilizing to serve the thousands who have been imperiled by the Trump administration — and to ensure that the rule of law is protected as well.

View a complete list of lawyers and their firms who have pledged to help reunify families and ensure representation for legitimate asylum seekers.

This article originally appeared in The New York Times on June 25, 2018. (subscription required to access article)

Big law firms have spent the past two decades chasing globalization. Between 2001 and 2018, the largest 250 U.S. firms added more than 1,400 new offices around the world, nearly doubling their geographic footprint.

Not Lowenstein Sandler. We’ve resisted the temptation to plant our flag outside the U.S., choosing instead to concentrate our efforts on the U.S. markets that we believe present the greatest opportunities for our firm and allow us to provide the best service to our clients. We’ve found alternative ways to offer our clients global reach–without the added complexity and volatility that come with operating international offices.

But make no mistake–our clients do business all over the world. And although all our lawyers are in the U.S., we’re able to serve clients wherever they need us through close working relationships with a few firms in key global jurisdictions (like London, Frankfurt, and Shanghai) and through affiliation with large global law firm networks that connect us with firms in over 100 countries and all 50 states.

Working with these groups enables us to identify the best, most culturally appropriate, and expertise-specific representation in every city in the world. When a Lowenstein client comes to us with a matter that requires foreign expertise, we make sure they’re getting the best local lawyers we can find–lawyers who can match our U.S. levels of service.

In fact, many of the largest transactions we led in 2019 were on behalf of U.S. clients investing in Asia, or foreign clients acquiring U.S. businesses. In each case, we served our clients extremely well by collaborating with the right lawyers in each foreign jurisdiction.

Coming out of the Great Recession, our leadership made the strategic decision to double down on our commitment to clients in the three sectors that made up the core of our business: investment funds (including private equity, alternative/hedge funds, and venture capital), technology, and life sciences. Focusing our attention, effort, and investment on those industries has made us stronger in our most important sectors–and helped us develop an expertise in areas like technology and finance that impact clients across the many other sectors we serve.

Our geographic focus aligns with that strategic orientation. Rather than chasing global expansion, we’ve focused on building strength in the markets that generate the most and best work in our priority sectors.

Nearly half of all the world’s legal work originates in the U.S., and nearly half of U.S. legal work originates in the New York market–where nearly 300 of Lowenstein’s 350 lawyers live and work. We serve the New York market from offices in midtown Manhattan and nearby suburban New Jersey, so our lawyers can choose which setting works best for them, their families, and their clients over the course of a day, a week, or a career. And because roughly half of our lawyers select our suburban office on any given day, we are able to share our occupancy-cost savings with our clients.

We emphasize sector and geographic focus over global expansion. Our concentration in fewer markets allows us to be selective about the talent we add and helps create consistency in client service and work quality across the firm. It also creates more growth opportunities for our firm, a higher quality of life for our lawyers, and more efficiencies for our clients.

The results speak for themselves: in the decade from 2009 through 2019, Lowenstein’s revenue grew by 88% while we added only two new offices (Washington, D.C., and Utah).

It helps that our firm has operated in the New York area for almost six decades while more recently opening in Silicon Valley, Washington, D.C., and Utah. We are extremely optimistic about the opportunities for growth in those markets and about the unparalleled strength of the overall U.S. legal market.

Meanwhile, our domestic model has shielded us from global volatility. Currency fluctuations alone have created significant challenges for firms with large concentrations of lawyers stationed outside the U.S.; by one measure, the strong dollar has diminished those firms’ growth by nearly half in recent years.

We’ve built our firm not to be all things to all clients, but to excel in our key practices and to serve clients in the industries where we’ve developed the greatest knowledge. We want to be where they need us most, and we work hard to ensure we’re delivering the best legal service they can get in those markets.