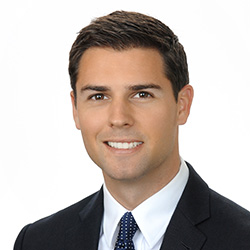 Paul Fraidenburgh is a trial lawyer who serves as Chair of Litigation for Buchalter’s Orange County office. He focuses his practice on representing clients in high-stakes commercial litigation, arbitration, and regulatory compliance matters.

Paul has prevailed on behalf of clients in the United States Court of Appeals for the Ninth Circuit and at the state Supreme Court level. He has also served as lead trial counsel in California and beyond. He represents clients ranging from government agencies to Fortune 100 companies. In 2018, Paul was named a “Top 40 Under 40” lawyer by the Daily Journal, as one of only 20 lawyers selected from Southern California.

In 2021, Paul represented a healthcare district in the trial of a high-profile case in which the plaintiff claimed $9.1 million in lost rental income damages as a result of a multi-year dispossession from a 60,000 square foot office building. Paul and his team achieved a complete defense verdict and a judgment in favor of the healthcare district for more than $4 million.

Paul has also served as an active member of several firm committees. As a member of the Pro Bono Committee, he has volunteered his time to organizations that serve underprivileged children.