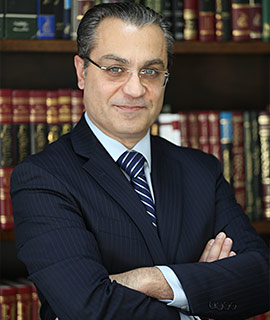 Profile
Charbel Abi-Antoun, founder and the Managing Partner of Beirut Law Firm, has earned broad expertise during more than Twenty years of Practice, with wide knowledge extended from his diverse participation in different legal activities. He has gained various recognitions from people known for their professionalism in the fields of Law or Businesses.

Between 1993 and 1998 Mr. Abi-Antoun was a Judicial Aider and a Head-Clerk of the Instant Court of Beirut; he was assigned, by the Ministry of Justice, as a Notary Public in Beirut, and was delegated to the "Arab Center for Juridical and Judicial Researches" for the "Arab Countries" League" under the auspices of the "Arab Ministers of Justice Council".

In May 2008, he was assigned by the "National center for State Courts (NCSC) as the "Court Administration Consultant" for "Lebanon Judicial Strengthening Project", a project developed and managed by and for the "United States Agency for International Development" (USAID).

Beside his Legal diverse engagements, Mr. Abi-Antoun was involved, for more than thirty years, with more than 15 charitable and Societal Organizations, such as Lebanese Red Cross, UNICEF, Terre des Hommes, UNIPADH, ANU-LIBAN and much more; as, in June 2017, he became a Member of the Advisory Board of CAIL (Center of American and International Law).