For at least a decade now lawyers have talked up the impending transformation of their industry, with technology set to play the lead role in a new and better way of doing things. Survey results showed legal teams in North America are enthusiastic supporters of technology. Over half (51%) of those surveyed felt new technology would significantly enhance outcomes within the legal team, while 84% felt it would enhance outcomes to at least some extent.

For at least a decade now lawyers have talked up the impending transformation of their industry, with technology set to play the lead role in a new and better way of doing things. Why would anyone think otherwise? The legal profession, as every GC will point out, is riddled with inefficiency. Clients are being asked to pay for things they do not need, and very expensive labour is routinely assigned to basic tasks.

But recognising the problem and identifying the solution are two very different things. While almost all GCs can give a long list of reasons why the profession should change and what it should look like, far fewer have a roadmap for how to get there. Until now.

‘There’s a movement afloat’, says Chris Young, general counsel of Ironclad. ‘For the first time ever in the history of the legal profession there is cutting-edge technology that allows us to do our jobs more effectively as lawyers. The whole profession is now waking up to what it can do differently, and it is in-house legal teams driving this change.’

But technology is only part of the picture. When it comes to understanding the changes taking place across corporate legal teams, the rise of legal operations (legal ops) is just as important. ‘For years every department at a major company has had its own ops function’, notes Young. ‘Marketing, engineering, sales – all of these departments have relied on operations professionals to keep them moving. Now we are seeing that in legal teams, and it is having a transformational impact on the way systems, processes, people and tech work together.’

Ashley Herring, global legal programme manager at BCG, is among the new breed of ops professionals working to improve legal teams. Identifying the purpose of the legal function, she says, is key to unlocking its potential.

‘The temptation for a lot of in-house teams is to set things up in a very transactional way that looks to a large extent like the model of an internal law firm. That is not really the best structure, and it doesn’t give the best results. Legal should not let itself become a dumping ground – it overburdens the lawyers and takes away from what the function can deliver to the business.

Setting up things in a way that lets you extract data and make data-driven decisions is essential to this. Technology can play a big part here but technology itself should not be the goal. The goal is being able to structure decisions and processes in a way that is based on data and numbers.’

In other words, technology is a tactic, not a strategy. While it can be a useful way of improving the legal function, it will only work if the function knows what it wants to accomplish. This, for many GCs, can be a difficult question to answer. But, for those that have given it thought, the possibilities are endless.

‘I want to be a data-driven lawyer and not just a lawyer who talks about data’, concludes Young. ‘With the tech that now exists I can look at our sales contracts historically and generate data that is of real predictive value. Finally, legal is beginning to function like any other department and use its data to accurately forecast what the quarter is going to look like.’

To judge from the results of our survey, legal teams in North America are enthusiastic supporters of technology. Over half (51%) of those surveyed felt new technology would significantly enhance outcomes within the legal team, while 84% felt it would enhance outcomes to at least some extent.

The appetite for technology was just as apparent, with 58% of respondents saying they wanted to increase the use of technology within their legal team.

As ever, finding the budget for new tech was the biggest obstacle they faced, with 62% of teams citing this as a barrier to change. Over a quarter of legal teams (26%) said they wanted to introduce new technology but lacked the time to research available tools, while just 11% said they were unable to find a solution that met their needs. 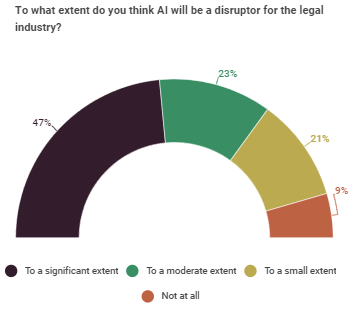 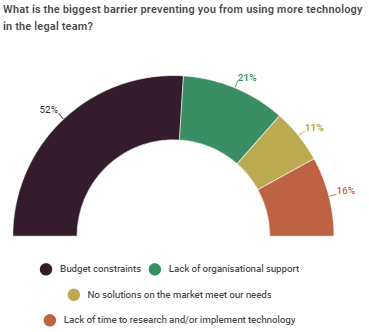 However, a sizable number of corporate counsel (14%) felt they already used too much technology. As one respondent, general counsel at a Canadian energy company, noted, ‘Finding technology is not a problem. Making sure that technology is being used properly by everyone in the team is the issue. You can’t execute a legal tech transformation in a large team without having some form of discipline and training. You either all do it together or it doesn’t work. I am quite willing to admit I do not have the time or expertise to effectively oversee that sort of project.’

Even the most popular and successful forms of legal technology, such as contract management systems, found their critics. ‘Lawyers love contract management systems, but do they really test how they’re being used?’, asked one respondent. ‘Of course, if you’re a lawyer then you intuitively understand why a contract platform would be useful. Go speak to the sales team that has to use it and you will hear a different story. I have found that these things are not actually all that intuitive at all when they’re out in the wild.’

Still, when it comes to a show of hands the consensus is that corporate legal functions will change for good: 91% of those surveyed said they expected AI to be a disruptor in the legal industry, with nearly half (47%) saying they expect this disruption to be significant. 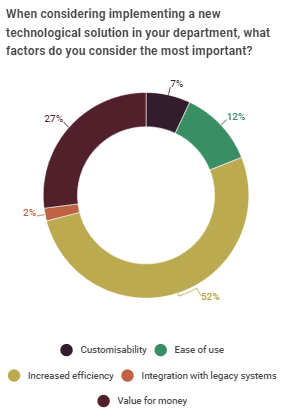 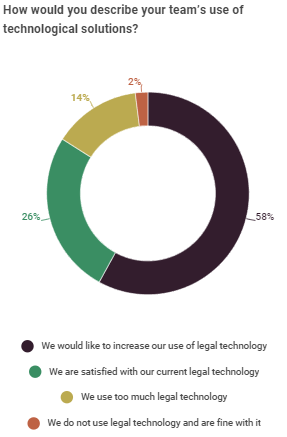 Inevitably, there will be push back. Any legal team over a certain size recognises that it needs a contract management system, but a solution that can flag risks or identify and extract terms is a different matter. For some, the unspoken message is ‘a machine can do your job, and it will be more reliable’. But, says Michael Shour of Banyan Software, the results lawyers can achieve with advanced tools mean widespread adoption is all but inevitable.

‘Recently, I trained an AI solution to help review a certain type of regularly occurring contract that was key to our business. It improved our response times and, I think, ultimately helped us win deals. It didn't get rid of the lawyers; it gave us better and more accurate information and allowed us to handle the matter more effectively.

The use of this technology will continue to evolve and become more pervasive. Already, service-level agreements and the general sophistication of providers have improved considerably. It is incumbent on GCs and legal tech providers to at least try to keep up with these developments, even if doing so is not always easy.’

As ever, there will also be strong resistance from State Bars when it comes to innovative ways of delivering legal services. But as the legal profession reaches critical mass in its use of technology, regulation will have to follow suit.